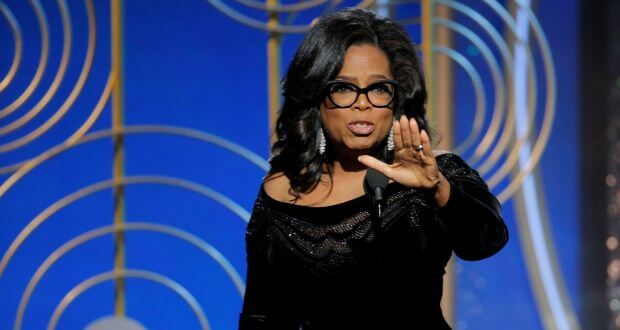 What Oprah’s Golden Globes Speech Can Teach You about Leadership

If you didn’t see it, you’ve definitely heard about it. We are talking about Oprah’s phenomenal acceptance speech at the 75th annual Golden Globes this past January. What she said that night in accepting the Cecil B. de Mile Award was extraordinary and strong, and it displayed her impressive leadership ability. So much so, that many were left wondering if candidacy for President of the United States in the next election was next on her list.

But it wasn’t just what she said, it was how she said it.

There’s much to learn from this speech.  With some guidance from public speaking expert Kindra Hall and Alyssa Satara, columnist at Inc. magazine, we’ve broken down some of the top takeaways you can use to be a better leader and presenter.

The first few words out of your mouth when delivering a speech are the most important. When Oprah took the stage she didn’t waste any time on pleasantries or fluff. She immediately launched into a story with the words, “In 1964…” Do not underestimate the importance of this decision. By starting with an inspiring and endearing story, Oprah framed the entire rest of her message with an inspirational tone.

Also note that by starting abruptly with the date, Oprah signaled to the audience she was about to tell a story; this wasn’t going to be your typical acceptance speech. With those two words she seized the audience’s attention.

Oprah hardly talked about her career and the work she’d done to make it to that stage. Instead, she used this opportunity as a platform to encourage and to lead. She built herself up, without bragging and without shoving the concept down her audience’s throat. She led them to that conclusion with a relatable personal experience and historical facts.

“In 1982, Sidney received the Cecil B. DeMille award right here at the Golden Globes and it is not lost on me that at this moment, there are some little girls watching as I become the first black woman to be given this same award.”

She gave weight to this moment, and let her audience share the magnitude of it. Oprah wasn’t shy to point out that she was making history.

Oprah’s speech made her audience feel powerful. She applauded their ability to create change and encouraged their opportunities to keep progressing. “Speaking your truth is the most powerful tool we all have.” She points to the incredibly powerful stories of Rosa Parks, and Recy Taylor to promote her point: individuals – each one of us – are powerful.

Throughout her speech Oprah referenced the #MeToo movement. When discussing this movement fueled by men in power harassing women, she empowers both men and women.

And she doesn’t leave anybody out: “But it’s not just a story affecting the entertainment industry. It’s one that transcends any culture, geography, race, religion, politics, or workplace…They’re the women whose names we’ll never know.”

Much like riding a rollercoaster; after taking the audience on an incredible ride with her words, Oprah brought us full circle right back to where we started – thinking about a little girl. Ending the presentation with a nod to the opening story is an expert speaking move that creates an immense sense of satisfaction and delight for the listeners.