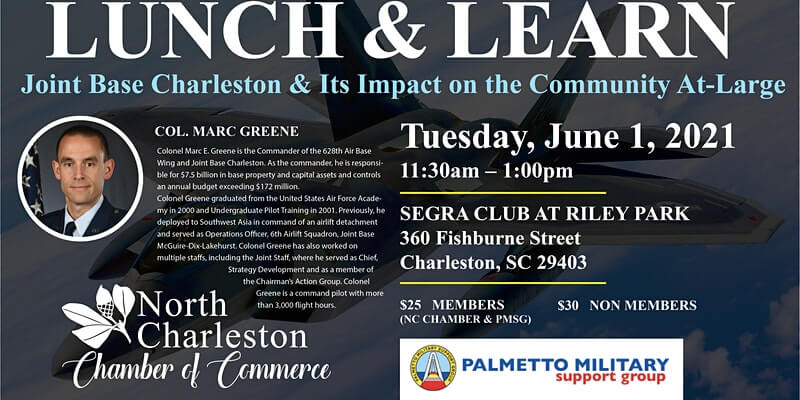 Lunch & Learn: Joint Base Charleston And Its Impact on the Community At-Large

In conjunction with the Palmetto Military Support Group, the North Charleston Chamber of Commerce is proud to host a very special “Lunch & Learn” on Tuesday, June 1, 2021 from 11:30am-1:00pm at Segra Club at Riley Park (360 Fishburne Street, Charleston, SC).

The event will feature Colonel Marc E. Greene, the Commander of the 628th Air Base Wing and Joint Base Charleston. As the commander, he is responsible for $7.5 billion in base property and capital assets and controls an annual budget of greater than $172 million.

Colonel Greene graduated from the United States Air Force Academy in 2000 and Undergraduate Pilot Training in 2001. Previously, he deployed to Southwest Asia in command of an airlift detachment and served as Operations Officer, 6th Airlift Squadron, Joint Base McGuire-Dix-Lakehurst. Colonel Greene is a command pilot with more than 3,000 flight hours under his belt and has also worked on multiple staffs, including the Joint Staff, where he served as Chief, Strategy Development and as a member of the Chairman’s Action Group.

Tickets to the event are $25 for members of the North Charleston Chamber of Commerce and PMSG, and $30 for all other attendees.

We hope to see you there for a great day of networking and connecting with fellow members of the community!